This is the second part of the Apple “iWatch” article and covers the technical aspects of such a possible product. Read the first part if you’re interested in the pure speculation and design side of this fictious product. 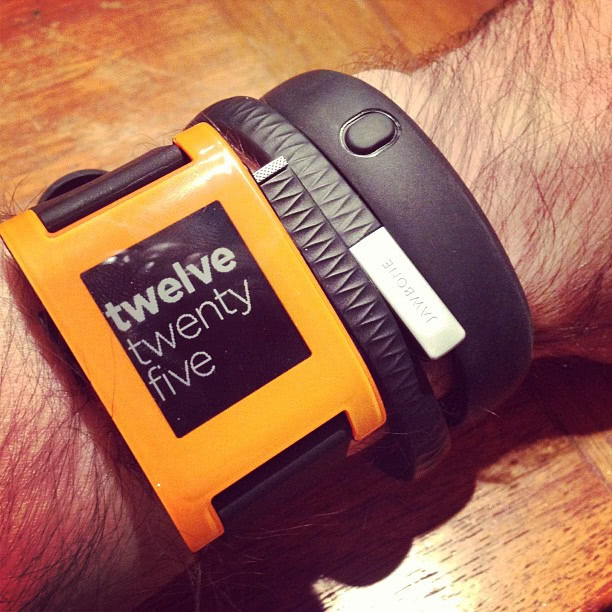 Picture: Running out of space (Pebble, Jawbone UP, Nike Fuelband)
Thanks to Aaron Parecki on Flickr, Creative Commons Attribution

A core feature of a personal device would be it’s ability to communicate with other devices. For example another quite personal device like a mobile phone. Bluetooth 4 low energy would be a suitable standard for such communication in many ways.

It was developed as an extension to the existing Bluetooth 4 specification for ultra low energy consumption. You wouldn’t want to have your devices' batteries drained all the time, would you? Some Bluetooth 4 LE devices can operate for months on a coin cell. This low consumption also is a benefit for companion devices and their respective power sources.

This technology is not suited for continuous data transfers like streaming audio to your headphones. It’s made for short burts to transfer small amounts of data. Like those taking place when sending a push message from your iPhone to be displayed on your personal device, for example an iMessage, location reminder or weather notification. Of course this would also work well for sensor data acquired by the device to be transferred to a phone or computer.

Another key aspect when displaying personal and possibly private data on a device is a secure communications channel. Bluetooth 4 LE allows for secure authentication between devices adhering to the ISO/IEC 15408 Common Criteria standard. So your private message should not end up being displayed on another person’s device.

Lastly Apple’s product palette already had support for this standard for quite a while. Particularly in the iPhone 4S and later models, the iPad since generation 3 (the larger form factor iPad with retina display) as well as the popular iPad mini. Cocoa, Apple’s collection of programming frameworks, also has support for CoreBluetooth with proximity information and profiles for many device classes including human input devices like keyboards and trackpads as well as medical devices and proximity sensing.

A device you’re wearing all the time will be a great source of body function data. Provided it is connected to your body as much time as possible. Most of the current sport armbands are just an accellerometer/gyroscope and a tiny bit of storage to save sensor data for a few days and a battery. The nike fuel armband is an exception as it also has an LED display, allowing it to show the time. (Just like a watch.) Similarly the Fitbit One which is clipped to your belt instead of worn on your wrist. Other products like the Jawbone UP do not have a display at all. It is basically just sensors, a battery and a connector. 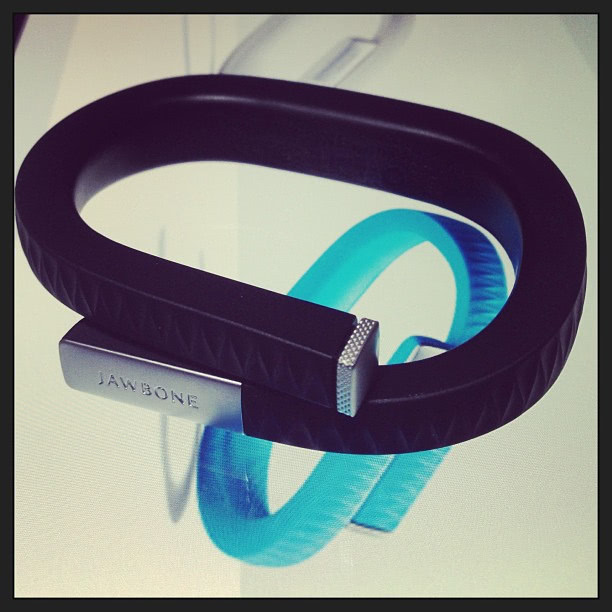 Picture: Jawbone UP
Thanks to Junpei Abe on Flickr - Creative Commons Attribution

Following the current trend of the quantified self such a device would be the ideal bodily data source. Of course motion tracking only would not be enough to be interesting to users. If that device is to be carried at all times on your body, you certainly want more sensors checking your body. You could have it measure heart frequency, blood pressure, skin conductivity (recoginzing if you’re sweating), blood glucose levels, etc. Many more things probably are possible to measure that way nowadays. Thus making the device not only interesting to those interested in aiding their fitness routine, but also helping those with diseases to improve their recovery or at least ease their chronic symptoms. 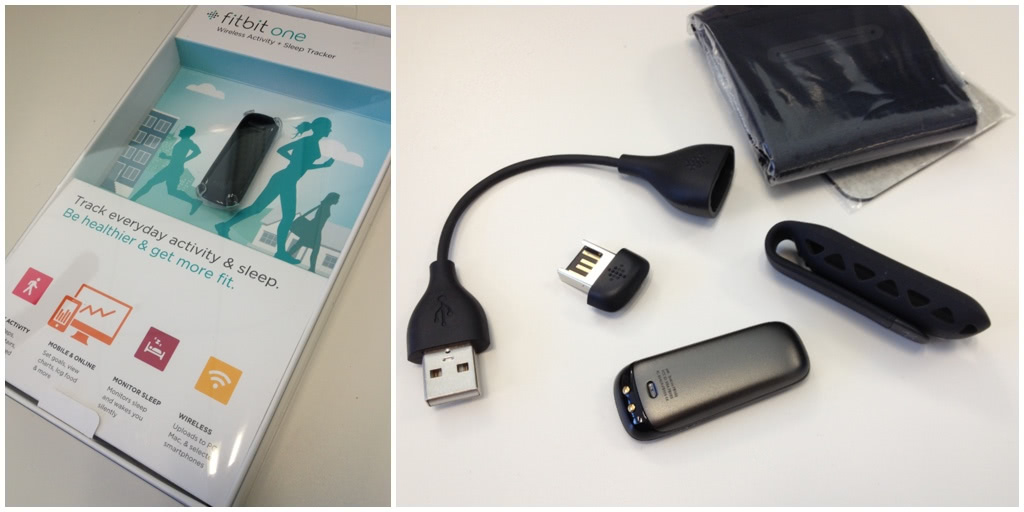 Picture: Fitbit one, Packaging
Thanks to Tatsuo Yamashita on Flickr, Creative Commons Attribution

There are many bluetooth sports products on the market already, but they’re mostly simple ones like those already described.

You don’t want to take off your personal wearable device every night just to recharge it. This would make sensors less useful and also reduce the amount of body data captured. Times where it isn’t connected to your body need to be minimized. Current iDevices and even MacBook Air models show that the better part of their weight and volume is the battery. This would be true for a wearable device as well. This poses another challenge which is recharging said battery. All the currently available prodocts require you to take them off to recharge. Most devices will last for a few days. According to Martin Pittenauer the Pebble does get about 6 days of battery life. Not really a comfortable time span for a wearable device even though most of us have gotten accustomed to charging our smart phone every night. One solution to this problem could be inductive charging as well as intel’s resonance charging technology. Inductive charging is used in electrical tooth brushes for example and can be considered common these days. Resonance charging is a newer technology allowing to distribute power over a greater distance. This would be ideal to recharge your personal device while still wearing it. For example with a small bedside charger that you could just leave plugged in there.

Users of the Pebble immediately notice that getting notifications is fine. But if you receive an email, that you just want to delete, you can’t do that. This clearly is a limitation of the device. Users certainly expect a wearable device to be able to fully interact with their smart phone or tablet device. It might as well be suitable as a remote control for a set-top media box. The black AppleTV has support for Bluetooth keyboards since firmware 5.2. This would pave the way for a wearable device being used as a remote control for your big screen. The 5th generations of the iPod nano had a (two finger) touch enabled display with the current 6th generation is even capable of multi-touch. Certainly the preferred and expected way of user interaction. Surely not enough space to provide a keyboard, but more than enough to provide a few custom buttons. Preprogrammed interaction to delete an email, reply to an iMessage with a premade message, pickup a call or anything your own app may need. Playback controls for your iPod sound like an obvious use case.

A small, thin and light wearable device can’t have a lot of processing power. It doesn’t need to actually if it can outsource expensive processing to the phone in your pocket. In fact, it would not really need a lot of CPU power. Apple has gained enough experience with ARM processors and embedded systems. Their iPod nano and Shuffle models show that they can sucessfully manufacture powerful systems with modest energy drain. 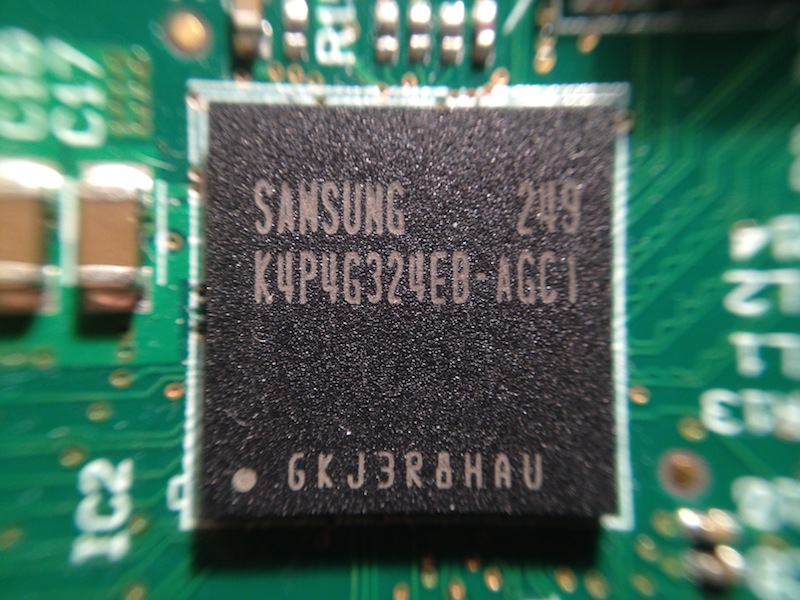 A processor like the Samsung manufactured ARM 11 type CPU ARM1176JZF-S used in the Raspberry Pi would already have way too much processing power and memory. Something like in the 6th generation iPod nano would be more than sufficient and conserve power. But even that CPU might be too powerful for the needs of a wearable device. Something on the lines of an ARM Cortex M3 seems much more suited and is also the processor used in the Pebble Smartwatch.

A certain chique is exepected from all things Apple. The Jawbone UP and the Pebble, while being nice products, not really meet user’s expectations from Cupertino when it comes to industrial design. Their material is plastics and rubber which are more cost effective than more noble materials like an aluminum-unibody casing would be. On the other hand they serve a quite necessary purpose which is being water resistant or even water proof. A not to be neglected property of a wearable device. Spilled Piña Coladas over your arm or got caught in the rain? Your device should be able to cope with that easily. It is likely Apple’s Patent 20120055767 comes in handy for that which talks about the use of coatings to make electronic devices water resistant. Just like Apple Patent: 20130074305 which coves special manufacturing and welding processes for very flat enclosures.